This is the most important election of our lifetime, and we are ready for change! We need to make sure that we are all registered to vote at our current address and are prepared to vote this year. You can check to see if your registration is up to date at iwillvote.com.

This election is too important to sit out. Diverse people from all across America are coming together to rise up against Donald Trump, a unique threat to our country and to democracy. They are marching not merely against Trump and all the Republicans who support him and his policies, but for Joe Biden and Kamala Harris who will unite people and what they will do to restore our economy, build jobs, protect our healthcare, protect the environment, stand up for science, invest in our children and their future, and so much more. Vote this year like your life depends on it. Vote early, and in person if you can. No matter what make sure you vote and that your vote is counted.

There are three ways to vote. Choose the voting method that’s right for you. Decide on which way you're most comfortable voting, just make sure you vote! Election Day is November 3rd, and beginning in September there are two ways to vote before November 3rd (Early Voting in Person, and Vote Absentee by Mail). 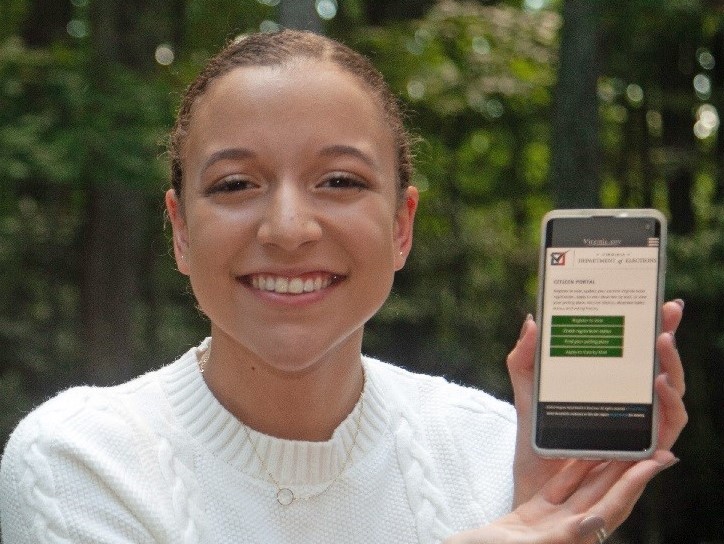 If you have any questions about voting or any concerns when voting, please contact the Democratic Party of Virginia Hotline: 1-844-482-8683 .
@DPVAvote | VADemocrats.org/Vote | 1-844-4VA-VOTE

Results reported from the following sources.

*  The Democratic PDF sample ballots are for personal use only, and not distribution. To be compliant Unofficial Sample Ballots in the Commonwealth of Virginia shall not be printed on white or yellow paper, HB1647 (unofficial sample ballots are those that are handed out by political parties, or other interested groups at the polls), 'SAMPLE BALLOT' to be in 24 point or larger, and to contain the required FEC authorization box.

If you requested an Absentee by Mail ballot you may personally bring that ballot to the registrar during early voting. Another person may not drop off your ballot or a group of ballots.

HOW TO VOTE ABSENTEE BY MAIL

FAQS ABOUT ABSENTEE BY MAIL VOTING

Election Day poll locations listed below, map click here. Vote in your home precinct: your ballot will not count if you vote outside your home precinct on Election Day. Check your voter registration, click here, for accuracy and where you vote (your precinct / poll location) in advance, BEFORE October 13th (last day to make changes) if you need to update information, address.

Polls are open 6:00 am to 7:00 pm. If you are in line by 7:00 pm you will be allowed to vote no matter how long it takes. Best option is to Vote Early in Person - make sure you no illness, traffic, transportation, family matter or anything else prevents you from casting your ballot.

Special Session of the Virginia Legislature

A special session of the General Assembly called for August 18th is planned to focus on budgeting, criminal justice and police reform. It's possible there could be some election related changes. Stay tuned.

As of July 1, the rules on absentee voting in Virginia will change as new legislation passed by the General Assembly takes effect. A new law allows “no-excuse” absentee voting in Virginia up to 45 days before election day, meaning voters will be able to cast their ballots early even if they don’t have a reason, such as having to work outside the county on Election Day.

The current list of all voting law changes from the Virginia Department of Elections (PDF 17 pages), click here.

finally replacing the ‘Lee-Jackson Day’ state holiday with one that truly represents who we are as Virginians and Americans, Election Day.”

Here is a summary of the House Democrats’ voting rights bills enacted during the 2020 legislative session; new laws become effective on July 1 unless otherwise noted below:

HB 1 – Under current law, Virginia voters are required to provide one of several allowed excuses to vote prior to election day. HB 1 allows Virginia voters to request and vote with an absentee ballot, by mail or in person, without having to specify a reason. The bill was carried by House Democratic Majority Leader Charniele Herring.
https://lis.virginia.gov/cgi-bin/legp604.exe?201+sum+HB1

HB 19 broadens the types of identification a voter can use to include certain items that do not show a photo of the voter. The bill makes it a felony to falsely sign an affirmation of one’s identity in order to vote. Delegate Joe Lindsey carried HB 19.
https://lis.virginia.gov/cgi-bin/legp604.exe?201+sum+HB19

HB 108 establishes Election Day as a state holiday and removes Lee-Jackson Day from the list of state holidays. This measure aims to increase voting accessibility to a large segment of voters in the Commonwealth. Delegate Joe Lindsey also served as the patron of the bill.
https://lis.virginia.gov/cgi-bin/legp604.exe?201+sum+HB108

HB 201 will implement same-day registration, allowing voters to register to vote on Election Day. The bill aims to help voters who move more frequently — younger voters, low-income voters, and people of color (https://fivethirtyeight.com/features/how-many-times-the-average-person-moves/ ) — and those who do not have reliable transportation, allowing a person to register and vote in just one trip. Virginia law currently sets a registration deadline 21 days before an election. Delegate Hala Ayala introduced the bill. The implementation of this bill is delayed until October 1, 2022.
https://lis.virginia.gov/cgi-bin/legp604.exe?201+sum+HB201

HB 207 will provide a special application for any voter to receive an absentee ballot in all elections that they are eligible to vote in. This will allow voters to permanently “vote by mail” without having to fill out separate absentee ballot requests several times a year to vote by mail in various elections. As in the case of HB 1, this measure also removes the requirement that the voter provide a reason for voting absentee. Delegate Schuyler VanValkenburg patroned HB 207. The bill becomes effective on July 1, 2021.
https://lis.virginia.gov/cgi-bin/legp604.exe?201+sum+HB207

HB 213 extends the ability for students to use their school photo-ID cards from any college or university within the United States or U.S. territories as identification for voting in Virginia. Currently, only in-state college ID cards are accepted. The bill was sponsored by House Democratic Caucus Chairman Rip Sullivan.
https://lis.virginia.gov/cgi-bin/legp604.exe?201+sum+HB213

HB 235 clarifies and improves the process by which the Department of Motor Vehicles offers U.S. citizens age 17 or older the opportunity to automatically register to vote when acquiring or updating a Virginia driver’s license or identification card. The process, which includes an opt-out provision, is intended to ensure that persons eligible to vote are more easily able to register. Delegate Joshua Cole carried this bill.
https://lis.virginia.gov/cgi-bin/legp604.exe?201+sum+HB235

HB 238 authorizes counting any absentee ballot that arrives at the registrar’s office by noon on the third day after the election, which is postmarked on or before the date of the election. HB 238 was sponsored by Delegate Mark Sickles.
https://lis.virginia.gov/cgi-bin/legp604.exe?201+sum+HB238

HB 239 adjusts the deadline to apply for an absentee ballot by mail to eleven days before the election, including applications from members of the military and citizens living abroad, and adds the same adjustment for emergency applications and absentee ballots for voters who become hospitalized or incapacitated. Delegate Sickles also carried this bill.
https://lis.virginia.gov/cgi-bin/legp604.exe?201+sum+HB239

HB 241 removes the requirement for a person seeking protected voter status to file a complaint with a magistrate or law enforcement in cases where the applicant is fearful of their safety or has been stalked. The requirement for a signed written statement from the applicant remains in place. Del. Sickles introduced HB 241.
https://lis.virginia.gov/cgi-bin/legp604.exe?201+sum+HB241

HB 242 allows voters to apply for an absentee ballot late if an emergency caused them to miss the absentee application deadline or will leave them unable to vote on election day. Delegate Sickles served as the patron for this bill as well.
https://lis.virginia.gov/cgi-bin/legp604.exe?201+sum+HB242

HB 872 adds an exception to ensure that persons confined due to an upcoming trial or due to a misdemeanor conviction, who would otherwise be required to vote in person due to registering to vote via mail, are able to vote via absentee ballot. Delegate Jeffrey Bourne introduced this legislation.
https://lis.virginia.gov/cgi-bin/legp604.exe?201+sum+HB872

HB 1210 requires the Department of Elections and local registrars to provide voting and election materials in languages other than English, to aid immigrant and Native American citizens who do not speak English adequately enough to participate in the electoral process. The additional languages required will be determined by Census data, percentage and number of language minority communities in the locality, and consideration of Native American reservations nearby. Delegate Kathy Tran served as the patron for HB 1210, which goes into effect on September 1, 2021.
https://lis.virginia.gov/cgi-bin/legp604.exe?201+sum+HB1210

References for voting information on this page.

Important official documents from the Virginia Department of Elections for volunteers and authorized representatives working at the polls. These are the same references used by the election officers and registrar.

What If's, click here
What to do when … A complete guide for helping voters with exceptional situations (31 pages, PDF).