Article One of the United States Constitution establishes the United States House of Representatives and apportions Representatives to the states based on population, with reapportionment occurring every ten years. The decennial United States census determines the population of each state. After the 2020 census Virginia has no change in Congressional representation, maintaining 11 Congressional seats. The Virginia Constitution Article II. Section 6 outlines redistricting, that was amended by voters November 3, 2020 despite recommendations against adoption of the redistricting commission by Democratic leadership. 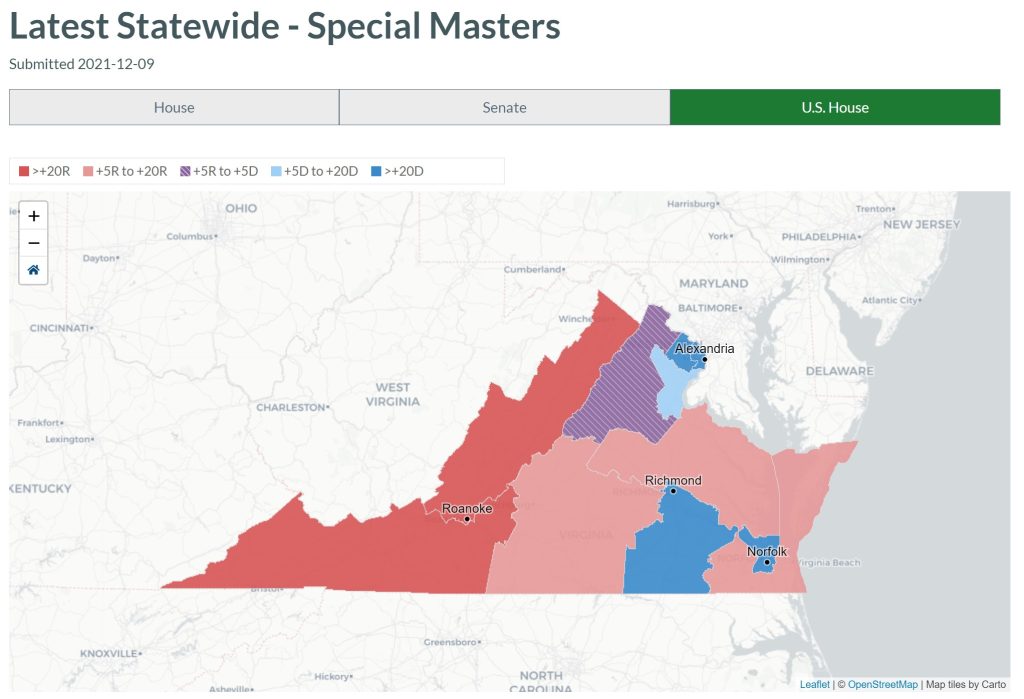 Tuesday, December 28, 2021 the Supreme Court of Virginia signed off on new legislative maps.

AP News: "In an order, the court said it had reviewed final redistricting maps — which were put together by two court appointees called special masters — as well as extensive public comment on earlier draft maps.

The once-a-decade redrawing of political maps had fallen to the court after a newly created bipartisan redistricting commission failed to agree on maps for either Congress or the General Assembly."

WTOP: "The order says the districts will be effective with the 2022 election for the U.S. House of Representatives. The General Assembly seats would be effective with primary and general elections for the 2023 election.

A lawsuit seeking to force a 2022 special election for General Assembly seats using the new districts is being considered in state courts. However, a ruling has not been issued."

(1) The Final Redistricting Maps and Final Memorandum prepared by the Special Masters and posted on the Supreme Court's public website at Supreme Court of Virginia Final Order and Approved Maps are incorporated herein by reference and are approved and adopted and, effective immediately, the Final Redistricting Maps shall constitute and establish the voting districts for the Virginia House of Delegates, the Senate of Virginia, and for Virginia's representatives to the United States House of Representatives;

"[the court]fiddled with a few lines, putting Craig County back into the 9th – “increasing the number of Virginia’s Appalachian counties placed in the 9th,” the special masters wrote – in return for moving some Roanoke County precincts into the 6th. But it left Salem, and Griffith, in the same district as Cline. Mathematically, this was almost inevitable. The special masters said they wanted to avoid crossing the Blue Ridge."

"The law doesn’t require [US] House members to live in their district, merely in their state. When Griffith first ran for Congress in 2010, Salem wasn’t in the 9th District. Voters sure didn’t seem to care then. Griffith could easily stay right where he is and keep on running in the 9th. "

Herald Courier: Southwest Virginia to lose a delegate seat via redistricting. "... Southwest Virginia will lose another House of Delegates seat due to declining population, with Del. Will Wampler, R-Abingdon, former 4th District being redistributed."

Virginia Constitution, Article IV. Section 4. Section 4. Qualifications of senators and delegates: General Assembly members must be a resident of their district.

"The most significant changes to the congressional maps appear to be in the Richmond area and Northern Virginia."

VPAP.org: Population distribution, which localities do people in this district live in? A table showing the share of the district's population by locality.

Blue Virginia: Many new Virginia General Assembly districts have incumbents doubled or tripled up, and in Floyd County the new HD47 has Delegates-elect Wren Williams (R) and Marie March (R) paired up. Of the voting age population, 23,947 come from Williams’ district, while just 12,402 come from March’s district (plus 23,710 from Del. Ronnie Campbell’s current district).

VPAP.org: Population distribution, which localities do people in this district live in? A table showing the share of the district's population by locality.